Books about inclusion and valuing difference have never been more important, but how do you get kids to absorb the good stuff when they’re unwilling to be overtly educated?(Okay, maybe it’s only my kid. Anyway.) Fortunately, many kidlit authors know how to inform and persuade without permitting a hint of didacticism to creep into their storytelling. Saadia Faruqi is an author, speaker, and interfaith activist based in Houston, and her book Meet Yasmin (Picture Window Books, August 2018) features an adorable Pakistani American second grader who makes the case for inclusion over the course of four stories, all presented as a slice of her life.

While each story tackles a problem, the conflicts don’t arise from Yasmin’s cultural identity–the plots are universally relatable. Yasmin faces challenges that every kid has gone through, such as getting momentarily lost in a crowded venue, worried that her entry in an art competition isn’t good enough, feeling bored and so on. And while Yasmin draws a map or builds with K’nex, we learn about her family and her background through narrative detail. 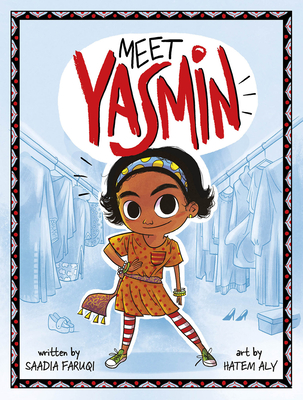 There’s some very clever writing going here, where the cultural information is prominent but never obtrusive, and Faruqi never resorts to platitudes or heavy-handed lessons. For instance, when Yasmin is heading to the Farmer’s Market with her mom, she can “hardly wait as Mama got her hijab and her purse.” Faruqi thus demystifies and contextualizes cultural markers without ever resorting to overt explanations. And kids unfamiliar with a hijab have a handy illustration to look at too!

Yasmin is a young seven–she holds her mom’s hand as she walks to the Farmer’s Market, and puts on a fashion show with her grandma. Each story is brimming with heart and charm. The illustrations by Hatem Aly nobly hold up their end — Yasmin’s large, twinkly eyes, and her tulip nose are the very definition of winsome.

And finally: Meet Yasmin is populated by the most diverse cast ever. Yasmin’s grandpa is disabled, her teacher is white, the famous television artist Yasmin looks at for inspiration is black, her friend Emma builds a church, Principal Nguyen judges the art contest, and so on. No overt references are made to identity — it’s all winningly presented as a part of the fabric of the world Yasmin inhabits.

In sum, Meet Yasmin, with its charming plot, subtle message of inclusion and diversity, and flat-out adorable protagonist would be a wonderful addition to any 5-8-year-old’s reading. May this book find a home in every second-grade classroom library in America!