Before starting this piece, let me clout myself on the head for not reading Thomas King all these years. There.

Thomas King is a Canadian (Cherokee) writer and broadcaster who advocates for First Nations causes. Now, I believe the First Nations people got one of the shittiest deals in the history of the world. Like, EVER. The story of their colonization makes the British occupation of India seem like dinner guests who stayed a tad too long. I’d reach the end of my natural life span before I could finish reading the list of crimes committed against these peoples.  (I’ve written earlier about residential schools, the last of which closed in 1996.) And this is not just ancient history–this is the stuff of our present lives. If you are a red-blooded organism, you should be very very angry.

King is indeed angry, but the first thing you notice about him is that he’s funny and affable.  Well, King explained that Native American issues are very harrowing for a general audience to engage with, and that he resorts to humor so as to keep his audience. In his radio show, for instance, in the segment titled 10 Reasons Why It’s Good to Have Indians in Canada, he listed the first reason as “they give the RCMP live targets to practice on.”  Smile. Wince. And…what’s the second reason?

King, who was born in California, spoke last night in my city–which  I learnt  is built on unceded Indian land (see stuff, present lives).  Happily, I seemed to be quite alone in my ignorance of his work.  King spoke in a gallery-style lecture hall designed to house several hundred skinny undergraduates, and the room was PACKED (and oh, those mingy chairs with those flip-top tables gave me a reminiscent chill). He was visiting for the launch of his new book The Inconvenient Indian: A Curious Account of Native People in North America, which explores what it means to be “Indian” in North America. 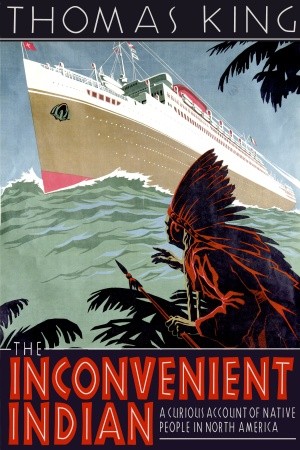 The cover shows an old advertisement for an European cruise ship line, and even my untrained eye can see so much going on here–the pink-white-beige ship, the flag fluttering as it plows through the boiling water, the black and red evocative of the devil…oh, I could go on and on. King began the evening by reading two excerpts from his book. He first talked about the apology issued by Canada (Harper) and the USA (Obama) to the native people of these two countries. It was a “disingenuous” apology, he said, in that they were willing to admit guilt but  no liability; the history of colonization and genocide was sought to be portrayed as “a no-fault fender-bender.” Besides being personable and inspiring and witty–oh, can he WRITE. He then spoke about the 1969 Native American occupation of Alcatraz, [Correction: he wasn’t at Alcatraz, though he did set out (unsuccessfully) for Wounded Knee]. What if there were a do-over? Well, there’d be cell phones, they’d make sure they had a doctor in the group, and oh, they’d pack plenty of toilet paper…

King then took questions from the audience, some very moving. Asked if things have improved for Native Americans over the past hundred years, he replied in the negative–things might have changed but nope, they haven’t improved in his opinion. He said their single biggest achievement was that despite the years of genocide, despite systemic efforts to make the native people disappear by the end of the 21st century, they are still around. Then there was a gentleman whose daughter was a newly minted social worker in Whitehorse. Did King have any advice for her? Yes he did, and of the soundest variety: Pay attention, be respectful, don’t be a savior on a white horse (ha!). And on his next book–could it be called The Convenient Indian? As in: conveniently demonized to suit the settler agenda? King replied that he was almost seventy, so his book would likely be called The Incontinent Indian, and no, that wouldn’t be convenient at all. King recently retired as an (English) Professor; oh to have been a student in that class.

I’m too old for seriousness, he said, his face deadpan, and then brought the session to an end to a round of prolonged applause.  Quick, someone do a PhD on King’s use of humor as bait-cum-weapon-cum-alarm clock to alert us to the ongoing resistance of the First Nations people.

21 thoughts on “Thomas King on finding humor in intolerable situations”