Raminder Sidhu’s ambitious debut novel Tears of Mehndi (Caitlin Press, 2012) seeks to capture the story of the Indian Sikh community in Vancouver’s Little India over the past thirty-five years. The story begins in 1976, with a shocking racial incident—a small Sikh-owned grocery store is vandalized, with chocolate milk splashed everywhere; the graffiti reads “Hindu brest [sic] milk for free.” Now, this is a very cleverly crafted anecdote, doubly conveying the depth of ignorance faced by the Sikh community. But if there is racism without, there is oppression within. Although the Sikh religion regards the sexes as equal,
traditional gender roles dominate in a largely patriarchal community known to prize izzat (honor/reputation) very deeply. As ever, it is women (and their bodies) who bear the brunt of such fervor–there’s an over-riding imperative to produce male children, strictures to keep girls chaste and unworldly, and inevitably, so-called “honor” killings. The issue is compounded by the hostility of the outside world; for instance, believing that Canadian education is only for
those willing to integrate entirely and erase their cultural differences, some Sikh parents withdraw their daughters from high school.

There’s some first novel-itis going on, with Sidhu attempting to say *everything* about this community in 237 pages, and the unwieldy cast of characters (eight different first-person narrators!) meant I gave up keeping track of whose daughter was clandestinely meeting whom about halfway through the story. But Sidhu has considerable authorial strengths, notably including her unflinching gaze and her deep insider knowledge of Indian Sikhs, as revealed in anecdotes thrumming with life and honesty.

When oppression is seemingly bound to tradition, in a minority community already under siege from the outside world, dissent can seem perilously close to betrayal. In such an environment, community is everything; the universe is divided into Apnay Lok (our people) and the goray (white) outsiders. And within the community, battle lines are drawn not just around gender, but skin color, religion, degree of Westernization, and even old regional loyalties (for instance, a character remarks that she doesn’t like another woman who is from the other side of the river in Punjab, where women are said to be very cunning). Sidhu seems to say that our definitions of community define us; we progress as humans when we adopt affiliations beyond the ones we were born with.

(This review appears in the current issue of Herizons magazine.)

I’m an ardent devotee of kids’ immigrant fiction, but often such books feature an incredibly earnest message. I wasn’t young Gandhi when I was twelve; why are most protagonists in these novels are so very virtuous? And why is their virtue rewarded by acceptance and popularity, when real life is infinitely less fair?

If you’ve ever asked these questions (and found only half-baked answers), you should rush to pick up Thanhha Lai’s Inside Out and Back Again.  Lai’s  memories of childhood haven’t been transmogrified by adult notions of correctness, and her narrative about a young Vietnamese girl transplanted to racially-charged 1970s Alabama is utterly convincing. Oh, and  her prose beats the pants off most YA writers in business today. I reviewed this book for the Asian Review of Books recently, and it was a real pleasure. 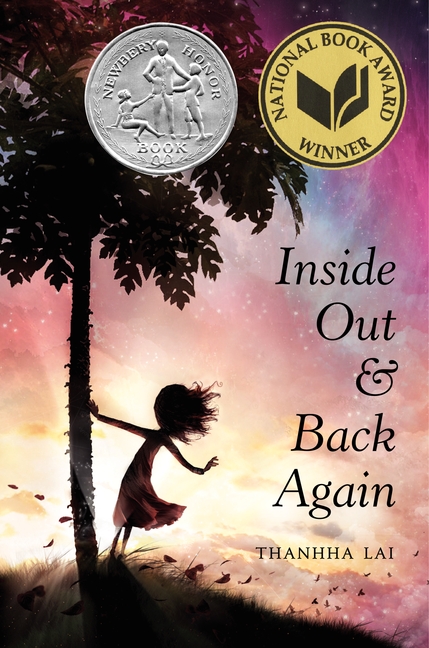 It’s 1975 in Saigon, and ten-year-old Hà is busy celebrating her birthday, waiting for the papayas to ripen, and solving fiendish math problems at school. Father’s away, fighting in the war, but Hà, her three brothers and Mother have managed—until now, when war has arrived at their doorstep. The family boards a ship leaving Vietnam, and finally end up in Guam, where they are sponsored by a family from Alabama. But now they “must consider the shame/of abandoning [their] own country/and begging toward the unknown/at the lowest level/on the social scale.”

The notion of social demotion caused by immigration lies at the heart of Thanhha Lai’s award-winning novel in verse, Inside Out & Back Again. In Vietnam, Mother is a secretary who designs baby clothes on the side; she is prosperous enough to consider buying a car, and sees her children becoming engineers, doctors, poets and lawyers. Immigration forces them to begin anew, disadvantaged by language, religion and race; the family is, at best, met with condescension (Mother observes that “the pity giver/feels better/never the pity receiver”), and at worst, with ignorance and hatred—a brick is thrown through their window, and eggs at their front door.

So, the Buddhist family joins the Del Ray Southern Baptist Church in Alabama, hoping that the neighbors will now stop slamming doors in their faces. Mother finds work sewing at a factory, while Brother Quang, a former engineering student, works as a mechanic. The compromises are all one-sided, and Hà often thinks she’d rather be in wartime Saigon. School is unforgiving—she’s called pancake face and Ching Chong, is asked if she eats dogs, and is poked and prodded till she starts hiding in the bathroom during lunch time. And academics are no better, for although she could probably win the Math Olympiad, she speaks no English, and is utterly humiliated and enraged when her teacher asks her to count till twenty—and the class claps. “So this is/what dumb/feels like.”

But there are good people too, of course, who help the family, and with time, Hà makes friends and learns English—enough to combat the school yard insults with some judicious taunting of her own. I was particularly taken with a scene when some students yell Boo-da, Boo-da (Buddha) at Hà, and she turns and yells Gee-sus, Gee-sus right back. What a rare pleasure—a fictional Asian character who doesn’t win over her enemies by modeling herself on Gandhi. Nope, Hà overpowers her chief tormentor (whom she calls Pink Boy) in a classic schoolyard fight. And when Brother Vũ, all dressed in black, picks her up from school on a “gigantic motorcycle”, the rout is complete—Hà is now cool. This book is targeted at eight-to-twelve year olds, and Lai knows her audience—she doesn’t advocate violence (far from it), but neither does she insist on a restraint unnatural for this age.

The Young Adult novel in verse has gained popularity in recent years, seemingly as much as gimmick as a genuine attempt to stimulate the reader’s aural imagination, but  Inside Out & Back Again gives a rare organic synthesis of story and form. The confessional, intimate tone of Hà’s first-person narrative and the intensity of her emotions find their logical expression in the short, sharp cadences of verse. Verse demands to be read out loud, and Hà’s attempts to pronounce English words add further richness to the phonological experience. “He says, Steven./I hear SSsì-Ti-Vân.”  If you didn’t sound that out loud, well, you must be missing an ear or two.

Lai infuses Hà’s  story with energy and insight and fun, and her prose will appeal to readers of all ages, for her thoughtful, poetic observations make us see the familiar afresh though Hà’s eyes. Here’s Mother, stitching with “the needle a worm/laying tiny eggs/ that sink into brown cloth.” There’s Hà, biting into a cookie “dotted with chocolate raindrops”. Tales of immigration and assimilation may now be commonplace; Lai’s writing is anything but.

Update: Please scroll to the end for the giveaway winner’s details.

“As I went to pick up my son at the end of his second day in Kindergarten, he appeared at the exit door with his patka [turban] almost off his head. I thought to myself, they probably had Gym class. But that wasn’t the case. I was quickly informed that another Kindergartener had pulled my son’s patka off his head while he sat on the carpet in class. […] I questioned whether it had been an action of curiosity? I hoped that the response would be positive but it was not. Bullying, in Kindergarten.
…
We came home and I held it together the whole way. Once we cuddled and I reassured him when he asked, “You going to tell [boy’s name] to say sorry to me?” I went into another room and cried. I’m not sure why I felt so defeated for that tiny moment but I did. But […] I gained my strength and prepared next steps.”

Vancouver-based mother/teacher/writer Navjot Kaur’s next step was to write a picture book that explained the visible symbols of her Sikh culture, so children would understand why her son looked different. A Lion’s Mane  (Saffron Press, 2009) tells children about the significance of the dastaar (turban, likened to a lion’s mane in this book), the name Singh (lion), langar (the Sikh community kitchen that serves food to all) and other central tenets of Sikhism. Founded in 15th century India, Sikhism emphasizes service and justice, and abjures its followers from cutting their hair–hence the turban for males. (Post 9/11, Sikhs faced escalating hatred as they were often mistaken for Muslims. Nasty every way you look at it.)

Kaur’s book is notable for the intelligence of her approach; rather than merely explaining/extolling her faith, she has her young protagonist show us how Sikhism’s emphasis on the lion is echoed in other cultures. The book thus affirms the importance of preserving cultural identity while denying exceptionalism, and that’s winning strategy for those of us experiencing multiculturalism in our daily lives. (My son’s kindergarten class of 15 made-in-Canada kids includes four East Asians, one Egyptian, one Australian and one South Asian (him), so you can see why I think this book is important and urgent.) Reading about Richard the Lionheart, the Chinese Lion Dance and even lion rugs in ancient Iran, children learn that across cultures, lions have many  (positive) associations–regality, strength, courage, and really awesome roars. Show me a child who wouldn’t want to identify with that? And if one’s faith happens to require a mane-like length of cloth wound to create a turban, well, that’s a great way to mark an affiliation with Sikhism–and with other cultures around the world. What a positive, inclusive message.

The book is also visually lovely, with illustrations drenched in rich color. 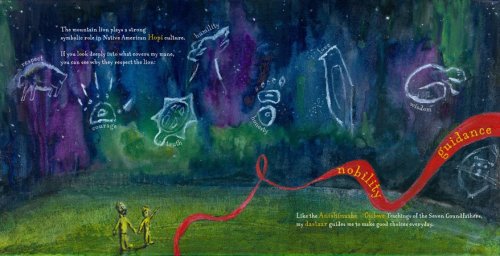 The red turban waves across each page, unfolding different qualities associated with lions. The above illustration (click to enlarge) explains the significance of the mountain lion in Hopi culture, and the turban says “nobility” and “guidance”. 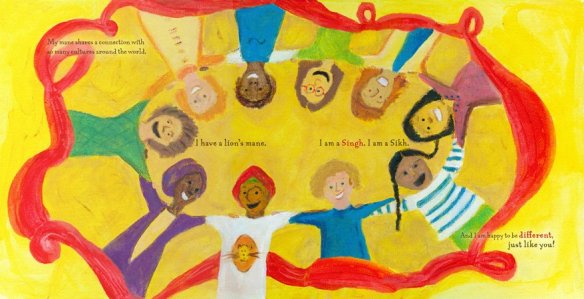 And one more, because it’s so cheerful.

Others thought the book was pretty great too–A Lion’s Mane won a Skipping Stones Honor Award in 2010.  The suggested reading age for this book is six, but the illustrations will appeal to the very young, while the text, which is fairly abstract, will suit nine and ten-year-olds. Those in multicultural surroundings will identify, while those in more homogenous environments will learn; I can’t decide which is the more important. In sum: this book ought to be read by kids of all spots and stripes.

You can buy this book for $18.50 here; a portion of the proceeds will be donated to Seva Canada, a charity that helps restore sight to blind children. The book is  eco-friendly, printed on kinder gentler recycled paper. And it’s  a hardback, so it’s handy to bop haters on their heads. I’m also giving away a copy of the book to readers of this blog; to enter, please leave a comment telling me you’d like a copy. The giveaway ends March 21,  is open to those with Canadian/US mailing addresses, and the winning comment will be picked by the reliably whimsical Random Number Generator.

If you are invested in kids, kidlit, and/or multiculturalism, do consider spreading the love about this book and giveaway. For the rest of Navjot Kaur’s story, and to read more about the genesis of the book, please visit her site here.

Update: Random number generator picked a commenter #5 as the winner; that’s Nupur! I’ll be emailing you shortly, Nupur, for your mailing address. Thank you to all those who entered–I read your comments with much admiration, and  I wish each of you could win a copy.