Twenty-four year old Margaret Hayton is a school teacher in Ipswich, and she’s an edgy (and infinitely more likeable)  Pollyanna for our age. Margaret directs her energy towards issues ranging from global warming to the placement of garbage bins on her street, and frequently writes her local MP Richard Slater to voice her concerns. Slater assumes that she’s a stereotypical old biddy (though Margaret’s letter protesting VAT on sanitary protection might have tipped him off differently), and dodges her requests until Margaret threatens to send her collection of his form replies to the Prime Minister, following which he agrees to meet her.

ZAP! Margaret’s  enthusiasm (and, um, her good looks) shock Slater out of his spin-centered existence into championing one of her causes–obtaining asylum for an Albanian refugee, Nasreen, who was forced to flee her home because of her inter-faith love affair.  Slater’s ideals, long gone to seed, sprout in Margaret’s sunny company, and the two gradually fall in love. 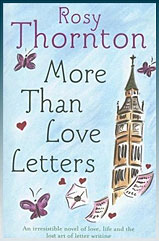 (Manly men: don’t be put off by the butterflies and hearts and love letters. Thornton, who teaches law at Cambridge, takes for her subject nothing less than immigration laws and domestic violence.  She  has much to say (all disturbing) about the marketing of her book,  whose original title, by the way, was Asylum. This cover is about as accurate having a David Lodge novel feature a gun and beer barrel propped up against a giant obelisk. Get out the, um, brown paper if you must.)

I’ve rarely read a novel where the personal combines quite so seamlessly with the overtly political.  Thornton’s delicacy of touch is especially impressive considering that More than Love Letters is an epistolary novel. We’ve all read books where it’s painfully obvious whom the heroine is addressing when writing to her  BFF “I was brushing my long chestnut-brown hair when my brother Jack phoned me from our father’s real-estate office.” MTLL never has you wondering why the characters seem compelled to quote Wikipedia entries at each other; the writing informs without ever veering into dreaded info-dump territory. We learn that Nasreen was forced to leave Albania as her brothers threaten her life for daring to love a man from a different faith, but Britain doesn’t recognize her as a legitimate candidate for asylum, and she’ll be deported unless Margaret and Richard manage to change the law. It’s only a day or two  after finishing the book that you realize that asylum laws in Britain circa 2005 have seeped into your mind despite yourself.

Perhaps what I relished most about MTLL was the humor and positivity steaming off each page.  Thornton’s fictional landscape has more than its fair share of grimness–there’s suicide and domestic violence, and the wicked often go unpunished–but after reading this book, you feel that it’s not a bad old world after all, and Thornton proves conclusively, you doomsters, that happy endings and intelligent writing aren’t incompatible.  Her characters are mostly pleasant and obliging, shouldering their burdens without whining, and they do the best they can (which is often pretty stupendous).  Thornton’s wit is pointed and yet very good-natured indeed–here’s Margaret’s Gran on her first brush with chick-lit.

“…I’m not sure they are my kind of thing. One has a picture of just the bottom half of a girl on the front cover, doing the hoovering in a miniskirt and stiletto heels, and she appears to have a half-empty wine bottle in one hand. I quite enjoyed the one she [Gran’s helper] brought me last week, but I find it such a distraction to be told in every chapter what shade of lipstick the heroine is wearing and the name of the shop where she bought her blouse.”

So, Gran is a kindly soul, who is obligated to her helper for supplying her with reading material as she has mobility issues, and who doesn’t like to criticize, but  her remarks are no less devastating for their gentleness.  Thornton is very very good as straining her opinions through the particularities of each character. And what characters they are–I took each one into my heart, and I dare you to find a more likeable heroine than Margaret in contemporary fiction.

And finally: I so love literary Britain–I grew up on Enid Blyton and her  kin, and it’s instant magic when a book refers to Mrs Danvers, Pooh Sticks,  Nevil Shute, and Mallory Towers. And when Rosy Thornton had Richard Slater quote John Thornton on Margaret Hay to Margaret Hayton’s dad, well, it was all very meta (or do I mean pomo?),  and *just* the kind of thing I chuckle over as I’m getting ready to sleep.

So as you can see, MTLL hit every sweet spot on my reading desiderata, and as god is my witness,  my first Rosy Thornton novel will not be my last. I hit my credit card for The Tapestry of Love earlier this week; you can borrow it from me if it’s not in the library, Ryan.