So, it turns out that I’ve birthed a child who likes reading and science. Specifically, he likes reading about science, which is Not My Thing at all (I finished The Martian in under an hour because I skipped the bits I didn’t understand). It’s been challenging to find him books we both like, and when we struck gold with the Young Reader’s Edition of The Boy who Harnessed the Wind by William Kamkwamba, I had to share the good news.

TBWHTW is the true story of, um, a boy who harnessed wind energy. As a fourteen year old, William Kamkwamba hacked a windmill to provide electricity to his home. Good but not unusual in the Bay Area, you say, where peanut’s first word was “circuit”, followed by “Apple stock”? Well, Kamkwamba  overcame lack of schooling, zero supplies, and famine conditions in his quest to build his windmill. It’s a great story, one that actually deserves the accolade inspiring. Not because he’s from Malawi, but because this kid could take a microplane and a table fan and some EVOO and fashion a drone to Mars. This isn’t some creepy third-world inspiration porn: it’s Kamkwamba’s resourcefulness and intelligence and integrity and sciency-ness that make him a hero. And yes,  it’s all great reading.

William Kamkwamba was born in 1987, in a small farming village near the town of Wimbe in Malawi. He’s curious and adventurous and a natural-born tinkerer, cracking open old radios to figure out their secrets. “The [parts of a radio] that look like beans are called transistors, and they control the power that moves from the radio into the speakers. I learned this by removing one and hearing the volume greatly reduce.” (That’s how you do it, kids.) He wonders how gas makes a car move, how music is stored shiny little discs, how dynamos work–and realizes that he needs to know more SCIENCE.

But just when things are going well, nature and government conspire to bring about a catastrophe. The new Malawian President, “a businessman… [who] didn’t believe the government’s job was to help farmers”, eliminates fertilizer subsidies. William’s family, like most farmers,  now can’t afford to buy fertilizer for their maize crop. When the rains fail, Malawi begins to starve. Due to mismanagement and corruption, the government stockpiles of grain don’t reach the needy, and in a very short while, people are dying of starvation and cholera.

William drops out of school as his family can’t pay the fee, and soon, they are down to one meal a day. Somehow, the family must survive till the next harvest. “The bones were now showing in my chest and shoulders, and the rope belt that I’d made for my pants no longer worked. … My arms and legs looked like blue-gum poles and ached all the time. I had trouble squeezing my hand into a fist.” And William’s dog…oh, man.

Just as the family is on the brink, the next harvest comes in, and they are safe. But there’s still no money for school, so William keeps up with academics by reading his friend’s class notes. Then his life changes: he discovers the Wimbe Primary School library, which has three giant shelves of books. (This.This.)  He finds a book explaining all things science, but it’s in English.  “I devised my own system…for example, if I was interested in a photo or illustration labeled Figure 10 and I didn’t know what it meant, I’d comb through the text until I found where Figure 10 was mentioned. Then I’d study all of the words and sentences around it.” And then he’d ask the librarian to look up words like voltage and diode in the dictionary.

Having thus learned English, William chances upon an American text book called Using Energy, which depicts a row of windmills on the cover. He realizes: “If I could somehow get the wind to spin the blades on a windmill and rotate the magnets in a dynamo, I could create electricity. And if I attached a wire to the dynamo, I could power anything, especially a lightbulb.” Charlie, you can keep your Golden Ticket.

After much trial and error, with the use of old bicycle spokes, a lotion tub, a broken cassette player, an old shoe from the garbage dump et al, William rigs up a working prototype. Followed by an actual, electricity-generating windmill that powers four bulbs and two radios in his home. This one: 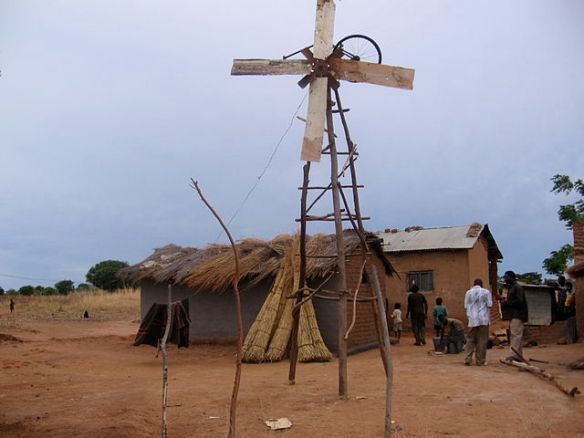 Much to his surprise, William’s windmill gets a little press coverage, and then a lot.  He gives a TED talk in Tanzania (utterly charming, he’s all of nineteen), and becomes a TED Global Fellow in 2007. He gets to complete high school. He travels to America, where he sees a wind farm, with windmills like those on the cover of Using Energy. At age 23, in the year 2000, he attends Dartmouth College’s Thayer School of Engineering. Meanwhile, with the money from the sales of this book and from TED donors , he helps provide electricity to every home in his village. He drills a borewell for his mom so she doesn’t have to walk two hours a day for clean water; the spigot from the borehole is free to use for the women of Wimbe. He installs solar panels on the village rooftops, and he helps the friends who supported him back when he was on a quest for copper wire and car batteries. He’s set up a nonprofit called Moving Windmills to help fund local village improvements and to pay for tuition.

This is the rare book that’s a winner on every count–it teaches kids about everything that’s important, and it’s a fast-paced, never-preachy read. Bonus points to co-author Bryan Mealer for making the story accessible but not overly Americanized (Kamkwambe uses the word petrol rather than gas, for instance). The book comes in three editions– a picture book for the very young, this young reader’s version (suitable IMO for 8-14), and a regular old people’s version. Read them all!