Dorothy Palmer taught high school drama for twenty-three years before publishing  her debut novel, When Fenelon Falls (Coach House Press, 2010). Critics called Palmer “a talented writer with an original voice and a marvellous ear for the nuance (and fun) of language”, and the book earned much acclaim, including a long-list nomination for the Re-Lit award.

When Fenelon Falls is a tragic-comic story set in 1969 in Ontario’s cottage country, featuring a young girl, Jordan, who is adopted and disabled–a protagonist based on Palmer herself. I interviewed Palmer about her activism, her feminism, and her writing, and the resulting piece “Bastards and Bullies” is up at the new issue of Herizons magazine. Here’s an excerpt.

DP: Since I was a teenager, I longed to see someone like me in a book and never did. I wrote to hear a voice I’d never heard, either in Canadian literature or later in broader feminist fiction or academia: the modern doppelganger of Canada’s girl orphan icon, Anne of Green Gables. I wanted to write a novel about a red-haired adoptee who knows it’s more than hair making her angry, who does far more about it than break a slate over Gilbert Blythe’s head. When Fenelon Falls is about things that fall–Jordan, a girl with a limp, Yogi, an entrapped bear, and all of the bystanders who should have stood up and done something about the falling they enabled and witnessed.

Alice Munroe said some years ago that she said she no longer liked the term “autobiographical fiction” because it had the cast of being a smaller, somehow less authentic, kind of writing done by women […] to my mind, Canadian women writers are still more often asked about and somehow tacitly dismissed as writing “just autobiography,” which carries the suggestion that autobiographical content is some kind of safe blueprint, or crutch. “Just” implies that fiction with less autobiographical content is somehow, A: the domain of real writers, namely men and B: real fiction, a more pure or literary art form. Obviously, many novels draw on autobiography, but nobody ever suggested that Faulkner or Dickens wrote “just autobiography.” While the settings are all real, When Fenelon Falls has far too much fiction in it to ever be considered “just” a memoir—its plot and commentary is larger than one life and certainly far larger than mine.

My novel is informed by years of working in my union and school board against other oppressions, against racism, bullying, sexual harassment and homophobia. My analysis and practice was always as two things: as an adult adoptee who almost passed as “normal” and as a disabled woman with a disability that almost let me pass in the walking world. Jordan makes many analogies between sexism, racism and what she calls “bastardism.” She sees bastardism as systemic, as built right into everything – language, children’s stories, television and books, and she knows her brother doesn’t see it because he’s a boy, because he’s privileged, “to the bloodline born.” He never has to think about how painful it is to hear what you are, a bastard, being used as a daily swear word […]

If you’d like to read more, please pick up a copy of Herizons (the piece isn’t online). And here’s an excerpt from my review of the novel, also in Herizons.

It’s the summer of 1969, and fourteen year old Jordan May March is figuring out her tenuous place in her family, in society, and in the world. Jordan is adopted and disabled, and is thus considered fair game for her family’s cruelty, especially from the cousins who gather each summer at the family cottage in Fenelon Falls. Jordan’s fierce intelligence, while enabling small acts of revenge, is also her downfall, for she senses the true animosity that lies beneath the teasing, and is unable to fool herself into thinking that it’ll get better. […]
When Fenelon Falls is saturated with rich detail about Ontario in the fifties and sixties, from the clothes to the music to casual bigotry that was simply how things were back then, and the narrative vividly illustrates what a complex, problematic, fractured, fertile era it was. If you know someone who insists that Canadian society was easier to navigate before the advent of, y’know, multiculturalism and all that new-fangled stuff, give him this book—and then watch him squirm.

It’s a funny, wrenching book, and I recommend do hope you’ll pick it up.

I’ve been interviewed on Open Book: Toronto by the wonderful Dorothy Palmer.  Here’s an excerpt:

“After completing my MBA, I worked for a while in large corporations (last with Citigroup), till I started believing I was entitled to do what I really wanted. I wanted to read and to write, and not just on stolen hours on weekends. So I got myself a Masters degree in the arts, and then I started sending out my work.

Clark Blaise says about Indian immigrants to [North] America that material success “has been the easy part. After all, they were programmed to study hard, invest wisely, and live frugally. But that other Constitutional promise, ‘happiness,’ has been elusive.” I’m a product of the Indian upper-middle class that Blaise so astutely portrays, and in some ways, I had to give myself permission to be happy and to believe that things would work out. And you know what? They did. Sure, it’s been a bumpy road–I initially received nothing but rejection from every Canadian publication I approached. (Fortunately my work got picked up in the US, otherwise I might have returned to banking.) I now work as a freelance writer and spend much of my time reading and writing.”

If you feel so inclined, you can read the whole thing here.

This weekend, I attended a round table conversation at IFOA on the topic “The Individual in Society”, featuring authors Bharati Mukherjee,  Lauren B. Davis, and Johan Harstad. In essence, the three authors discussed why they (and their characters) chose not to conform, their respective motivations and reasoning, and the consequences of questioning the values of the societies they belonged to. I was (predictably) most interested in hearing Mukherjee–I’ve been reading her since high school, and “The Management of Grief” still tears me up.

I was particularly intrigued by Mukherjee’s response to Harstad mentioning that self-effacement was part of his manifesto of living. Harstad said (I’m paraphrasing liberally here) that he always endeavored to cause the least amount of fuss, to minimize his societal footprint, if you will. For instance, he said that when his flight landed, he always remained seated till the passenger in the aisle seat was ready to disembark. Mukherjee replied that it took a certain confidence to behave in such a manner, and that sometimes, in some societies, the only way to succeed was to claw and grasp at the most fleeting opportunites. Here’s the thing: Harstad is from Norway, while Mukherjee’s protagonist is a girl from small-town India. Pushing and shoving are perhaps both inevitable and necessary in a society featuring scarce resources, one that imposes draconian consequences for bucking tradition. I think a small-town girl would be mincemeat if she chose to be self-effacing rather than brash-bordering-on-selfish.

The tricky part, I suppose,  is recognizing when to abandon that sort of mindset. I think some are so conditioned to having to fight for the least glint of opportunity that twenty years after, they’re still jumping the queue at the $9.99 India Palace lunch buffet despite earning six-figure incomes.

Anyway. After the talk, I briefly met with Mukherjee and asked her to sign my book, and I didn’t have to spell my name out for her. And of course I gushed like an idiot; poise: when will you make my aquaintance?

Some of you may have noticed a pleasing symmetry in the above post: Clark Blaise and Bharati Mukherjee are husband and wife. I’ll be hearing Blaise read this Thursday at the Rogers Writer’s Trust  Fiction Prize event.

I attended two readings by Canadian authors last month. Or rather, I tried to; more about that later.

Kristen den Hartog read from her new novel And Me Among Them (Freehand Press, April 2011) last week at Bryan Prince Bookseller. It was the first time I’ve attended an event without having read the book in question, and I felt worm-like, knowing it was disrespectful to both writer and the writing. (In my defense, I’d requested Hartog’s book from the library much earlier, but it hadn’t made it to the shelves by the event. But still.) Also, I get much more out of a reading when I already know the plot–I can concentrate on the particular meanings the author assigns to her words without having to follow the storyline in tandem. 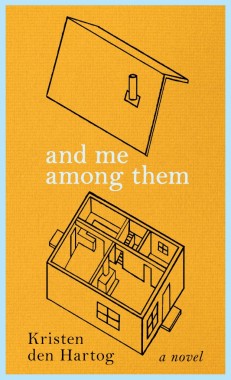 Despite my ignorance of the text, I enjoyed the evening very much. Hartog was gentle and approachable and easy to talk to, and radiated niceness;  you’d pray to spot her sort while searching for kindness from strangers. I chatted with her about her blog “Blog of Green Gables” which chronicles her reading adventures with her daughter. It’s a lovely, moving journal, accompanied by the child’s  illustrations, and each time I read it, it has me wishing I could magically produce a ten-year-old daughter to add to my family. (My mini-Athena would spring fully-formed out of my head, with a library card in one hand and a thermos of Earl Grey in the other. But I digress.) 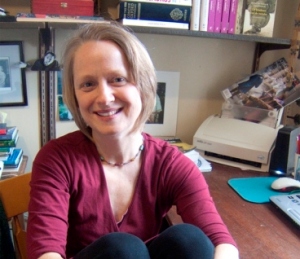 And Me Among Them is a novel about a young girl affected by gigantism.  From the author’s website:

“Born to a postman and an English war bride, a young girl named Ruth begins to grow at an alarming rate. The doctor claims nothing is wrong, but she soars upwards, and is the size of an adult by kindergarten. Though ostracized and teased by the other children, she longs to be among them.

Ruth’s giant perspective gives her a bird’s eye view that conveys her profound capacity for empathy. She can see over place and time – back to the days before she was born, through to the lives of other giants, and even into the intimate thoughts of her mother and father.”

Yes, you should read it; I picked my copy from the library yesterday.

Bryan Prince Booksellers, where the reading took place, is a wondrous place. It’s beautiful and dignified and serene. Kerry Cranston (who co-owns the store with her sister Tracy Higgins) and her staff are passionate and extremely knowledgeable about books. The event was accompanied by wine, cheese, and Ontario strawberries–and it was all free. I want to bake this store cookies and, while the oven heats up,  pave their sidewalk with gold. If you are looking to buy books in Canada, please go here: http://www.princebooks.net/ And send them Facebook love here, do.

The other reading was a talk by Dorothy Palmer about her novel When Fenelon Falls (Coach House Books, Oct 2010), at the local library. I liked the book very much, and had all sorts of questions planned for the author–who did not show. There was no word from her or the publishing house (who had plugged the event on their website, Facebook and on twitter) to the organizers or the audience. After waiting for a half-hour, and checking every form of social media for information, I surrendered to my mom-fate: I went back home, washed off my mascara and changed into sweats, and put my son to bed.

I love authors and books and small presses, and I understand that unexpected delays and cancellations are the stuff of life, but surely, an update was (and is) in order. So, to whoever was in charge of this event: WTF, eh?

Update: I have since received an apology and an explanation of the communication error from the (blameless) author. All WTF statements are hereby recanted, and I reaffirm my love for authors and small presses.