For many years, my email tagline read “Obedient women seldom make history.” (Now I’m older and have zero edge, and so my email tagline is my LinkedIn profile.) As we know, women have always been expected to obey social rules even if the said rules diminish, confine, and humiliate them. So Ann Shen’s book about women who didn’t obey the rules and (hence) went on to change the world seemed like *exactly* my thing.

Shen is an L.A. based illustrator and author, and Bad Girls Throughout History: 100 Remarkable Women Who Changed the World (Chronicle Books, 2016) is her first book. It’s a super-long listicle featuring a hundred daring women; each woman gets a write-up about her achievements and her bad-assery, and a full-page color illustration too.

The merits of this concept need no further puffing–either you fully endorse and appreciate such a book, or you have no beating heart. A++ for the idea, the timeliness, and the presentation. The book is beautifully produced, and I went through it several times just because it’s so fun to flip the pages and see the pictures. This book would make a great gift for older girls (and boys!) to teach them about figures in history who are all too often overlooked. And to teach them art. Ann Shen has more painterly talent in her eyelash than I possess in my entire being, and her illustrations are awesome (if verging on prettified).

I’m also delighted to have learned, via this book, about a couple of amazing women, like Khutulun (b. 1206), a Mongolian princess who wrestled with her suitors and defeated them all. Ching Shih led a pirate fleet known as the “Terror of South China,” and retired happily at 35 to run a gambling house. Some of the other women I learned about weren’t as impressive, but were intriguing nonetheless.

The main issue for a reader/reviewer with this book of this sort is with the inclusion–and omission– of their picks. Shen includes the caveat that the book isn’t “a definitive list of the one hundred bad girls in history”, but I have a whole bunch of issues with her selection criteria. First, I wish she’d relied less on her personal research interests and adopted more rigorous and objective standards. The book features Lilith (Adam’s wife pre-Eve in the Garden of Eden), but includes no other figures from any other (religious) myths at all. C’mon, I would totally expect to see Kali, the baddest of them all, with her skull necklace and blood-smeared sword on the front pages. As for figures from Egyptian or Mayan or Native American myths? A big Nope from this book.

Which brings me to my second issue–Shen’s choices are way too Eurocentric/Western for a book with the subheading “100 Remarkable Women Who Changed the World”. There isn’t a single South Asian woman apart from Malala; South Asia is a quarter of the world’s population, y’all! No Native American women either. And as you probably guessed, Africa and South America aren’t exactly well-represented in these pages. 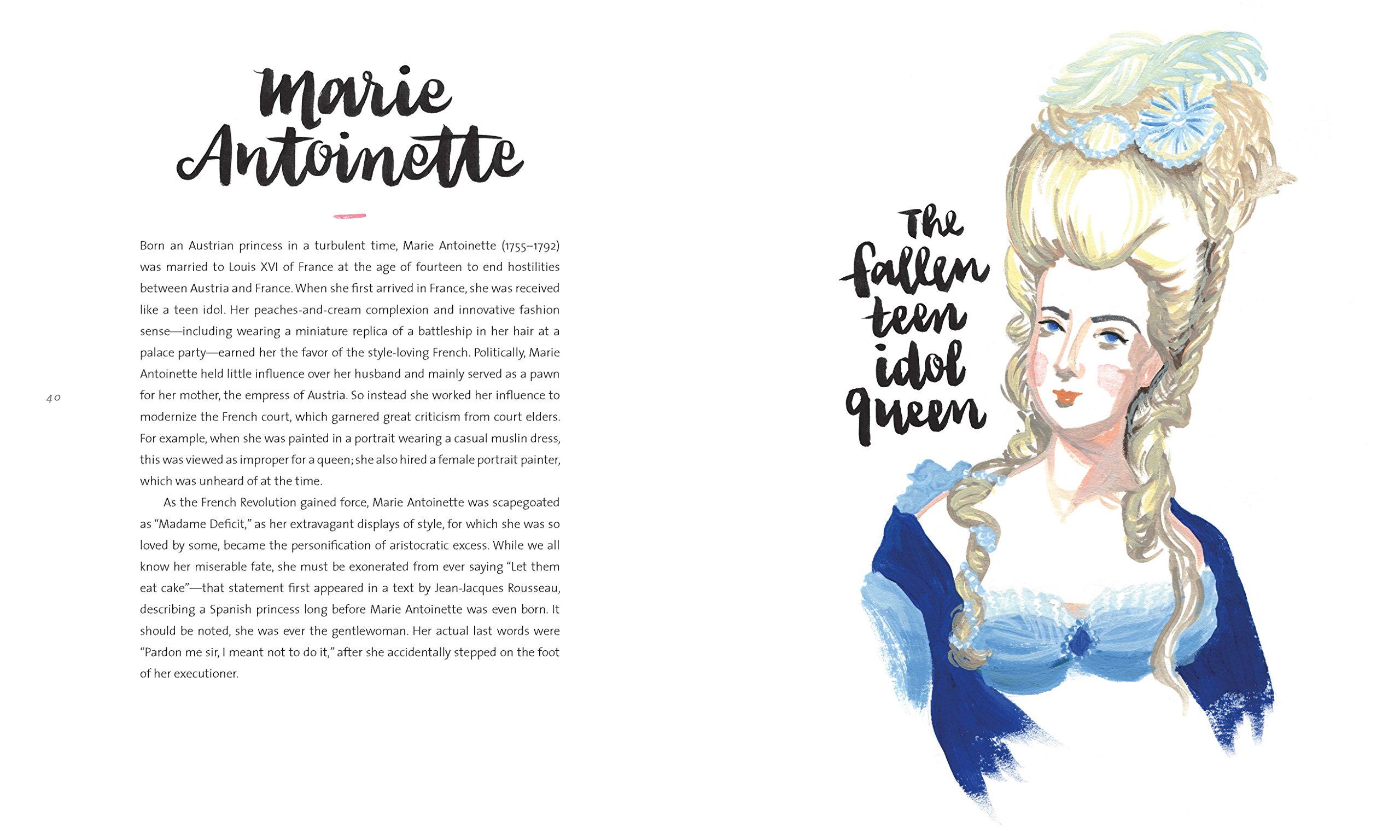 Also, Shen exhibits her chosen hundred in chronological order of their birth, starting with Lilith and ending with Malala, and the only way to find out whether someone is included or not is by checking the contents page for their names. There’s no alphabetical index, or even grouping by field. Do you know when Audrey Hepburn was born? How about Indira Gandhi? Mother Teresa? Prepare to manually scroll down the contents list each time. (And none of the above women are included, btw.) And half the women featured were born after 1895–that’s a very heavy skew in a book claiming to cover women “throughout history”.

Finally: I wish there’d been a bit more thought given to the write-ups. Margaret Thatcher’s description is much too kind. The entry for Rosa Parks is so determinedly non-offensive that there isn’t a smidge of emotional resonance in the read. In sum, this book is an entertaining but over-simplified look at some interesting women; for a reader in this day and age, that amounts to a bit of a missed opportunity.  I’m hoping for a second, expanded, edition–this time with less Disney and more depth.

4 thoughts on “Bad Girls Throughout History by Ann Shen”