Saturday was California Bookstore Day, an event celebrating indie bookstores all over the state. Tragically, my city doesn’t feature an independent bookstore (there are comic stores, but you know it’s not the same), and so my son and I went to the bookstore in our neighbouring town. There were events and literary goodies galore, and we started off by buying this poster.

About that anatomically incorrect guy in his underwear and the dog in a diaper. My son loves the Captain Underpants books by Dav Pilkey. You say you haven’t heard of Captain Underpants and Professor Poopypants and Super Diaper Baby? Some people have all the luck.

So….I haven’t warmed to these books (understatement alert), but I also recognize that they aren’t written for me but for a kid who thinks “butt” is the funniest word ever, right next to “stinky” and “slug”. As a parent, I mostly stumble around deciding on a case-by-case basis as to where to Draw The Line, and in the matter of Dav Pilkey’s work, I figured I wouldn’t/oughtn’t prevent my son from reading age-appropriate if utterly tasteless humour. So we laid down $10 for this poster, which is now hanging in my son’s room, and then we bought the latest Geronimo Stilton Spacemice book because his birthday is coming up soon.

But I’d had a secret agenda for visiting the store as well: I’d had my eye on these literary tea towels all along. Literature! Tea! in a glorious towel union! 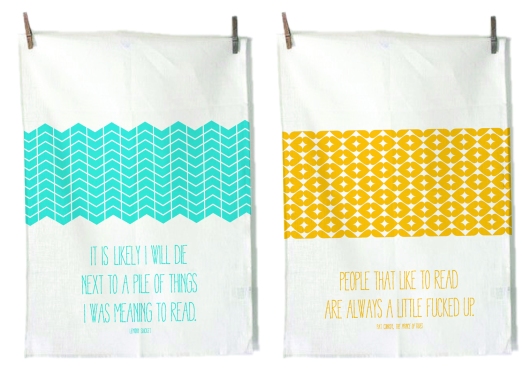 The teal one reads “It is likely I will die next to a pile of things I was meaning to read–Lemony Snicket.” The yellow one says “People that like to read are always a little fucked up–Pat Conroy.” These are the “salty” towels–there’s another “sweet” set of two towels with different quotes featuring more family-friendly language.

But alas, I ended up not buying either set of towels. They were indeed brilliant as conversation pieces, but I didn’t think I’d get much traction from them when used for their intended purpose. I live with a seven-year-old who spreads jam around a twelve-foot radius every breakfast and often mistakes a tea towel for a dishrag, and these towels didn’t look like they’d survive such abuse. And I didn’t want to buy them just because they were cute (which they *totally* were). The notion of collecting stuff that is intended to be functional but ends up decorative confounds me–what’s the point, say, of dressing up a bed with those unyielding hand-embroidered pillows which must be removed each night? Moreover, I dislike collecting stuff that I don’t need or can’t use immediately. The prospect of having to take care of the said stuff, store and mentally catalogue it (and decide whom to bequeath it all upon my death) gives me the shivers. You know those homes with gracious glass-fronted display cases housing lovely objets d’art collected on world travels or crystal handed down by ancestors who bit bread (or had sex) with royalty? Well, that’s my nightmare residence. The only things I collect are books, hell yes! Indeed, it is likely I will die next to a pile of things I was meaning to read…

I seem to have digressed from the topic of California Bookstore Day, which, in 2015, expanded to include independent bookstores all over the country. I hope you celebrated the weekend in your own bookish way! And check out @bookstoreday for pictures and tweets from the day.