I’m very fond of novels set in rural England, especially when they’re packed with dead bodies and genteel old ladies and vicars and odd-sounding desserts (the chocolate shape!), and so I follow Alan Bradley’s Flavia de Luce mystery series, set in a post-war English village seething with murderous intent below a keep-calm-and-carry-on surface. Flavia is a precocious eleven-year-old whose deep knowledge of chemistry comes in handy for her vocation as an amateur detective. She lives in a decaying manor with her father and her two older sisters, and her relationship with the latter is filled with resentment and fierce love and devilry (their interaction is one of the highlights of this series). I wasn’t entirely taken with the first Flavia book (The Sweetness at the Bottom of the Pie)–I often found Flavia irritating, almost verging on caricature, and felt that the emphasis on the Britishness of the setting and principals was overdone. But my grievances didn’t last long, for in the subsequent books, Bradley struck a winning balance between Flavia’s intelligence and her vulnerability as a child unable to fully enter the adult world around her. For instance, in I am Half-Sick of Shadows, Flavia bends her wits to catching the murderer, but she’s also setting a cunning trap for Father Christmas. And the setting doesn’t feel as studiedly British anymore. 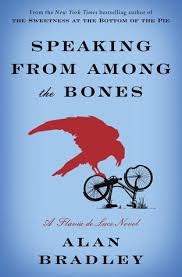 In Speaking from Among the Bones (to be released later this month), Flavia is, as usual, sticking her small nose into everything that’s not her business, and this time it’s a saint. It’s the five-hundredth anniversary of Saint Tancred’s death, and the saint’s tomb (in the village churchyard) is being opened for the occasion. But something has jammed the entrance. Being small and bendy and full of ‘satiable curiosity, Flavia volunteers to crawl into the tomb, where she promptly finds the body of the church organist. Who killed Mr. Collicutt, why is he in the saint’s tomb, and why is he wearing a gas mask? The answer takes Flavia through a hunt for a diamond, tin soldiers, secret tunnels, tombs (and sometimes, tunnels through tombs), a person afflicted with leprosy, and much more. Meanwhile, the de Luce family’s finances have dipped dangerously low…

I enjoyed the writing in this installment very much. Bradley is a funny guy, and I think this one is the funniest of the series so far. I spilled my coffee when I read Flavia’s version of  “We Three Kings of Orient Are”.

“We Three Kings of Leicester Square,
Selling ladies underwear,
So fantastic, no elastic,
Only tuppence a pair.”

You hummed this one while reading, didn’t you?

And there are some lovely thoughtful moments–for instance, Flavia, musing about motherhood, remarks it’s often a “a grim old business, and one that could never, really, be shared”; there’s a part of all mothers that is “forever beyond knowing”. And of course, we readers remember at this point that Flavia has never known her dead mother. I’ve really warmed to Flavia’s characterization over the five books–what seemed obnoxious and smug now seems merely spirited and faintly pathetic, and oh, the thought of this bright odd child entering adolescence gives me the shivers for her.

While I did find much to like, I’ve concluded that Bradley’s plotting style is just not my thing. Bradley makes a sort of stew of idiosyncratic characters and period detail and meaty chunks of history, and keeps stirring the pot while adding fanciful new ingredients, and brings it all to a boil with a flourish. The resulting dish will no doubt please many, but the whole thing felt messy and overcrowded to me. For instance, there’s a lengthy riff about British military history in the eighteen century, but the whole section is very tenuously linked to the actual murder. Interesting, yes, but ultimately distracting, I thought. If you prefer, as I do, mysteries featuring elegant diamond-cut plots that march inexorably towards a solution, this is not a series for you. But Bradley’s wit  and my fondness for Flavia (and an absolute corker of a last line in this book) have me eagerly anticipating the next installment. MOAR!

2 thoughts on “The fifth Flavia de Luce: Speaking from Among the Bones”