It’s been an unusually warm winter so far, and I’m not complaining: I’ve shoveled only twice this year. But I do miss snow; winter is unheroic and unbeautiful otherwise. When it did come down earlier this week,  my son and I were both so madly cheered that we played soccer in the yard.

I’d been waiting for suitably wintry weather to introduce my son to The Snowy Day–the first picture book to feature an African American protagonist–and I’m very glad that their meeting took place during Black History Month. The Snowy Day (1962) by Jack Ezra Keats is the story of a young boy Peter who wakes up to a snowy morning, and discovers the magical things he can do with snow.

Before Peter goes back into his house, he carefully packs a snowball and puts it into his pocket. Alas, the snowball vanishes, and Peter  is sad; moreover, he goes to bed afraid the sun will melt away all the snow. But the next morning, he wakes to find it’s all still there, and that more snow is falling.

There’s so much that’s telling and tender about this book–Peter’s quiet acceptance that he’s too young to play with the big kids, his contentment in playing by himself, his fear followed by his (and the reader’s)  joy that there’s more snow to play with, and most of all, his relish as he makes tracks in the snow and smacks the snow away from the tree branches.  The physicality of a child’s interaction with the  external world–it’s not about what it look like, but what one can do with it–is conveyed with incredible warmth and care. My son’s particular point of honor is to dust the snow away from all the cars parked on the street, and oh, his pleasure in being at just the right height for the headlights when he’s too small for so much else. And he rolls about in the snow as I would were it snowing chocolate. 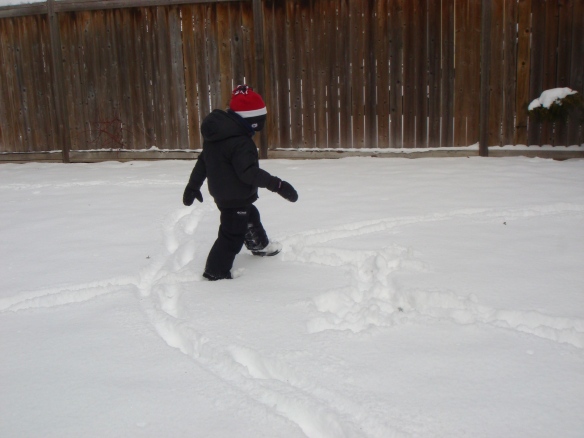 Children read books as much to recognize themselves in its pages as to learn about others, and it’s a bloody shame that black kids had to wait till 1962 to see themselves in a book.  Keats (who was white, and Jewish) wrote about The Snowy Day, “None of the manuscripts I’d been illustrating featured any black kids—except for token blacks in the background. My book would have him there simply because he should have been there all along.”

2012 marks the fiftieth anniversary of the book’s publication, and several resources about the book, including an animation, are available on The Ezra Jack Keats Foundation website here.  Keats wrote several other books featuring Peter, and my son and I have also enjoyed Peter’s Chair, a charming story about Peter’s baby chair getting passed on to a young sibling. Strongly recommended!

14 thoughts on “A Snowy Day in Black History Month”